If you have a Samsung laptop series 5 or series 9 from 2011 and 2012, you’ll find the following interesting. 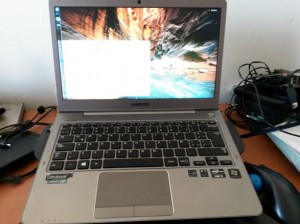 If you have one of the following symptoms:

then it means that you have a “stuck” embedded controller.

For the anxious, I’ll let you know two more important facts, before getting into the story, the embedded controller talk, and the workaround fix:

There is a permanent fix, which will not require you to hit the reset button. More on that later.

My end of the story:

I bought my Samsung ultrabook Series 5 in november 2013. I started noticing these issues during the first week. On that saturday I decided I had enough and spent the day trying to find a way to recover the lost functionality, and be able to go to suspend by closing the lid again. I figured that since the screen went off when closing the lid, it meant that the lid sensor was working fine, and that it must have been a BIOS or motherboard problem, since neither linux nor windows were capable of detecting the lid, wheras they both previously did.
I toggled all BIOS screen options and all Samsung Easy Settings options. None of this brought functionality back.
So I set out to reflash the BIOS, hoping that some hidden internal option causing this would get reset to default. But I quickly found out that Samsung bios update tool doesn’t let you flash the BIOS if it’s already the latest version. Long story short, that same saturday of november I found a way to do that and shared it here:
http://forum.notebookreview.com/samsung/683727-where-lid-closure-sensor-series-5-ultra-np530u3c.html#post9455595
After flashing the same BIOS version over, the lid detection and power supply unit (PSU) detection started working fine again.

A few weeks later the syndrome came back. I reflashed the BIOS again and it got fixed once again. This time I realized that it came back right after resuming the laptop from sleep, so I refrained from suspending it in the future. Using the laptop bacame no-fun. It lost its cool.

The issue came back.

Closing the lid was ignored, and the charging icon persisted even after unplugging the laptop from the wall.

I searched online once again for this issue, and this time I found a bug report in ubuntu’s launchpad website. In that thread I found a better way to fix the issue that didn’t involve reflashing a bios, but just involved hitting the reset button in the back, which I never noticed before:

Reading that forum, it quickly became obvious that they talked about the same problem, even though they mentioned different models. It confirmed to me that the issue was suspend related, and some posters suggested that the issue came back for sure when leaving the laptop suspended for a long time, though there was no precision as to why some suspensions didn’t trigger the bug and others did.

At first I just shared my own temporary fix (reflashing the bios), since I read that some folks thought that samsung fixed the issue with a new bios… though it is a temporary fix, not due to the new BIOS, but due to the act of flashing itself (which is actually because the embedded controller gets reset after a bios flash). And while sharing my own fix in post #97, I theorized that the “problem state” might be triggered by a poor implementation of Intel Rapid Start. Later I found I was wrong with Intel Rapid Start. It made some sense at the time to me, given that the posters said that a long time suspended triggered the issue and that Intel Rapid Start also gets triggered during suspend (by time or by battery low). I began to leave the laptop suspended overnight

Vacation time came from work. After a few days of recovering from lost hours of sleep, and having gone around the house fixing things (fawcets, etc.), getting up to date with housekeeping,  I gave a look at my ultrabook and thought to myself: “you’re next”. hahahaha

First I tried to put my theory of Intel Rapid Start interfering from sleep to the test. I had rapid start disabled since the day I bought it. So I thought that that could be the cause, I thought that the BIOS expected rapid start to be enabled and that when it didn’t find support for it the bug was triggered (but I was wrong). I enabled intel rapid start (this required me to resize the SSD partition to make room for a special hibernation partition). To enable intel rapid start, I had to do it from Easy Settings in windows, (otherwise, the INT3392 acpi device wouldn’t show up).  Having enabled it, I could now use the intel_irst module in linux, which had a /sys interface (wakeup_time and wakeup_events) to enable/disable rapid start triggers by time or battery, and to configure the time.
I started a text file keep a log of my tests.
I started leaving the laptop suspended for whole nights, trying different values for wakeup_time and wakeup_events.
I realized that they made absolutely no difference. Intel rapid start was ruled out as a cause.

I made further tests (see post #100 of the launchpad bug thread). Too many to mention here.

At the same time I studied my laptop’s DSDT. (Attached here). In case you don’t know: DSDT code is an almost platform independant code (it’s not assembler or machine code) provided by the BIOS to be run by the OS. This code is interpreted by the OS. It’s like “a driver provided by the BIOS” to be run and interpreted by linux or windows, to serve as an interface or glue. It’s different for each laptop, and when you update your BIOS, you are updating the DSDT too. The DSDT code is read once by the OS, on each boot, from the BIOS.

Searching for everything I needed to know regarding the production of those events, I found these two useful links, which gave me a break:

It goes like this: when battery changes one percent (up or down), or when you close the lid on your laptop, the Embedded Controller notices this, and produces an interrupt through the general purpose event 0x17 (other laptops might have different GPE for the EC). Code in the OS handles the interruption, and asks the EC for the exact event produced:

If the event has a status with 0x20 bit mask set, the OS runs the corresponding _Q## method of the DSDT to handle the event. In the case of the LID, the _Q5E() method could be called, and if the lid status was different than before, an ACPI event gets generated through a call to Notify(LID0, 0x80). Pretty much the same for AC (ADP1 device) and Battery (BAT1 device) status.

Now, because of my tests, (see post #100) I realized that there was a rythm to all this. Events were missing in the problem state, and there was an almost exact number of events which I pinpointed as 8 plugs/unplugs from AC when suspended (or some battery drop or increase during suspension), that put the laptop into the problem state again. The Embedded Controller was at the center of all this. I also found the quickest way to reproduce the issue and get into the “problem state”, to test potential fixes:

There is another way to get the laptop into the problem state that I discovered:

Reading the presentation in this link provided me with the inspiration to try to query the embedded controller directly. Little did I know that that was all that was required to make it unstuck, and see events again being produced with “acpi_listen” in the console.

I made this program to poll the events left in the embedded controller directly. I realized that it fixes the issue immediately (in the same way that hitting the reset button through the small hole in the back). You can run it at any time, but ideally run right after resume from suspend.

What we can deduce from this is that the Embedded Controller keeps trying to report events while the computer is suspended. Since there is no OS to reply to them, it accumulates them, and after a certain number of events (battery percentage drop or increase, AC plugged or unplugged, Lid open or closed, are all each one event), after a certain number of events, it stops producing GPE 0x17 and the OS doesn’t query them anymore… CLASSIC CHICKEN AND EGG situation!!! because the OS only queries the events when it receives a GPE interruption.

You can find it in post #102 of the launchpad issue. I’ll put it here too.

There is a better solution based on my research, that Lan Tianyu made as a patch to the kernel, waiting for further tests in the kernel bugzilla issue 44161, see comments #133 and #135 there, I confirmed that it does the same job perfectly as my workaround fix.  If that gets merged to the kernel someday, you won’t need my workaround anymore to enjoy your laptop. The kernel patch uses proper ec.c functions to query the Embedded Controller after resume from sleep, instead of direct port poking.

UPDATE (1) 2014-02-23: Kieran Clancy has made a better kernel patch and posted it on the usual kernel bugzilla, comment #149. I tested it and it does the job, perfectly as my userspace program workaround does, but from inside the kernel. It also unstucks the EC not only on resume but also on start.

UPDATE (2) 2014-02-23: I made a better workaround that doesn’t hardcode the EC port numbers as constants but instead reads them from /proc/ioports. It is a much safer workaround, and should work on any model. It also now sleeps for a millisecond between queries, which I found doesn’t query the same event more than once. It is now also GPL. It follows below (you can still find the original in the launchpad issue post #102).

UPDATE (3) 2014-03-01: The latest version of the fix in the form of a kernel patch by Kieran Clancy has been posted to linux-acpi and linux-kernel mailing lists: http://marc.info/?l=linux-acpi&m=139359680828880&w=2 You can still use my non-kernel workaround if you don’t want to recompile a new kernel. But this is great news, it means that the fix is moving towards being included by default some day in the kernel.

I want to thank the community so much for all the good feedback that I received. This bug has been causing frustration to many people since at least two years. I’m just happy that I found a diagnosis of it, and a solution, and that I could share it with all of you guys. In particular I want to thank Kieran Clancy for bringing my workaround fix to the attention of the linux kernel people, where a kernel patch has now been made and I guess is now waiting for further tests.

From the feedback I gathered so far, my fix works in the following models:

there maybe more models out there affected by this issue. Mine is the NP530U3C (2012 Ivy Bridge i5 cpu, bought in november 2013). And there might be more problems solved by this than just the LID close detection and AC status detection. For instance, Dennis Jansen has numbers showing that it fixed performance issues with his laptop: https://bugzilla.kernel.org/show_bug.cgi?id=57271#c29 Its no surprise really, the embedded controller handles many tasks and provides a lot of different events.

This site uses Akismet to reduce spam. Learn how your comment data is processed.